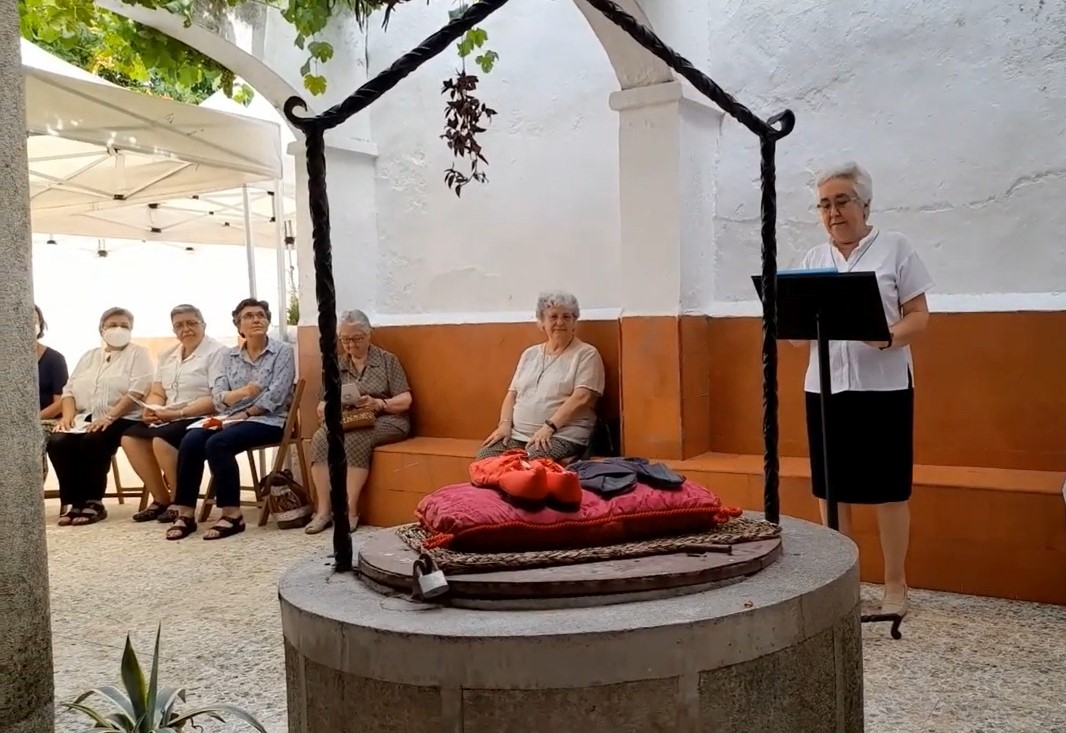 The General Government cordially receives you and gives an affectionate welcome to each of you who have been convoked to celebrate this congregational event – ​​Berta, Beatriz, Graciela, Teresita, Graça, Divina, Lourdes, Fátima, Mª Victoria, Mariló, Loli, Mª Ángeles, Mª José, Carmen, Luz Mª, Mª Isabel, Beatriz, Encarna, Sandra, María, Alfonsa, Angie, Elmor, María, Teresita, Nelcin, Cinta, Mercedes, Myrna, María, Kity, Carmen- and to many people who will collaborate in the smooth journey of the Chapter, such as Momoko and Carlota as translators, Concha Gómez and Nuria Rodríguez as secretaries.

Let us open our arms as a sign of welcome, let us look at each other. We are a community of sisters, we are different, plural, some with experience of having participated in Chapters and others, this is their first time, all Handmaids of the Divine Heart, chosen by our sisters to celebrate the XXI General Chapter.

“We go from beginning to beginning, through beginnings without end”, wrote Saint Gregory of Nyssa back in the fourth century. Life is always a new beginning, we are always beginning again, and in our history, each chapter is, without a doubt, "a new beginning": joint search, openness to the signs of the times, listening attentively and openly to God and to the sisters, opportunities that are offered, roads that are opened before our eyes, new possibilities to discover and explore, new paths to travel...

“On July 26, 1885, the feast of the glorious St. Anne, Mother of Our Lady, it can be said that the Congregation of the Handmaids of the Divine Heart of Jesus was born. After having celebrated in the Church of Sta. María, that is, in the Tabernacle of the Cathedral, the solemn morning function, wherein Rev. Marcelo Spínola y Maestre, Bishop of the Diocese, preached numerous viewpoints, which filled the temple, the idea that made the new institute emerge from nothing, and the means with which to carry it out, there was an abundant meal given in the Episcopal Palace to the nineteen poor girls, who must have been the first students of the Esclavas; and in the afternoon; having obtained the blessing of the Prelate, they congregated to begin their religious and sacrificial life in a modest house adjoining the Chapel of St. Benito, ceded by the Bishop to the Congregation, and dedicated by it to the Sacred Heart of Jesus…” (Acta fundacional)

Remembering the past is good for us.

The roots are in the past and the plot of the history of a people, of a human group, of the Congregation that is essentially liberating, cannot be cut. A people without history is a people without roots. The memory, to be authentic, cannot be done in a legal or nostalgic key, but in a prophetic key, as the Word of God that disturbs and challenges us.

The great contribution of the people of Israel is to publicly recognize that God has not fallen asleep but is always giving life where we sow slavery and tragedies.

Remembering our origins is not a call to reproduce nostalgically and romantically the first community of Handmaids around the well. We are called to update the experience of the first Handmaids in the first half of the 21st century when a new world is emerging.

Yes, sisters, a new world is emerging, of which we know almost nothing, only that it is different from the one we have lived in until now. This world is developing in the midst of disconcerting events such as the pandemic generated by COVID-19, the multiple wars generated by people, ... and the consequences they are having on a planetary level, especially on the most vulnerable peoples, on the land we step on and inhabit... God speaks to us, calls us and wants us to collaborate with Him.

The path that we are traveling as a Congregation and as a Church is a path in which, guided by the Spirit, we are called “to a deeper communion, a fuller participation and a greater openness to fulfill our mission in the world”. (Pope Francis, Speech at the opening of the Youth Synod, October 3, 2018)

Religious Life is a mystery of communion. God brings us together from different places and cultures to live in communion our following of Christ.

Let us not be afraid of the new, the different, the diversity, the plurality; is it not there, in the sincere search, the dialogue between conflicting visions, where deep communion becomes more palpable, that plurality is richness and diversity a gift?

Let us value the diversity among us, let us listen to all the voices, let us welcome the diverse opinions... in this way we will discover that it is the Lord who makes us one body.

Participation is a requirement of our religious profession. We are all called to participate in the life and mission of the Congregation. If the real participation of each sister is missing, there is a risk that the words about communion remain as pious intentions.

Let us listen as a “sacred word” to the contributions that have come from the entire Congregation, let us allow ourselves to be inspired by them.

We create among ourselves spaces that favor empathetic listening, dialogue in freedom, learning with humility, to communicate without fear or reservations because the Spirit blows where he wants. A space where we all feel at home and can fully participate.

Dialogue leads us to novelty, to be willing to change our opinions based on what we have heard from others.

- Greater openness to fulfill our mission in the world…

Our sisters ask us to be open to the Spirit, the true protagonist of this congregational event.

An openness that enables its action to go beyond ourselves and makes it possible to listen to everything and everyone. We know that many times the truth and light emerge when and from where it is least expected, hence the need to open up, listen deeply from the heart and prayer.

Openness to the Spirit, without prefabricated ideas of how the Congregation should be today. To be faithful today to the charism received involves opening ourselves boldly and creatively to the needs of our world, discerning what the Lord tells us in order to respond to him with the best of ourselves, as a community.

Let us make the Chapter an exercise in discernment because we are convinced that God is at work in the world and we are called to listen to what the Spirit suggests to us. By listening we do what God does: listen to the cry of his people.

The icon of the Visitation that has accompanied us on the pre-chapter journey visualizes two extraordinary motherhoods. It is expressed very beautifully by the Italian philosopher Antonella Lumini, hermit of the city, as she calls herself.

"Mary expresses the awakening of the original innocence that has remained uncontaminated from the beginning and preserved in the intimate of humanity (...) Isabel, on the other hand, the old and sterile woman who becomes a mother by grace beyond all possibility, presents herself as a figure of dry and tired humanity, whose fruit, already unexpected, sprouts as juice from the final milling to constitute the living seeds, which can be implanted anew.”

For these two motherhoods to be realized, it took both the YES of Mary, an expression of her openness to the gift of the Spirit, and the NO of Elizabeth (No!, he will be called John), who broke with the tradition of “it is always like this”, to be faithful to the will of God. In fact, John means the one who is faithful.

Let us be inspired by the courage of these two women of faith, Mary and Elizabeth. May they accompany our discernment and transmit to us their courage to know how to say YES or NO, according to the inspiration of the Spirit, and thus be able to generate new life.

With this desire, today, July 12, 2022, in Coria, I declare officially open the XXI Ordinary General Chapter of our Congregation.